Deziree Smith was born in 1983 in the Industrial town of Vereening, Guateng, South Africa. Pursuing her art career from an early age, she attended extra art classes in the evenings after school. Persistency paid off when she, along with six other youngsters, won a national art competition. The winners were awarded an extensive tour through the Eastern Cape, where they attended various art workshops 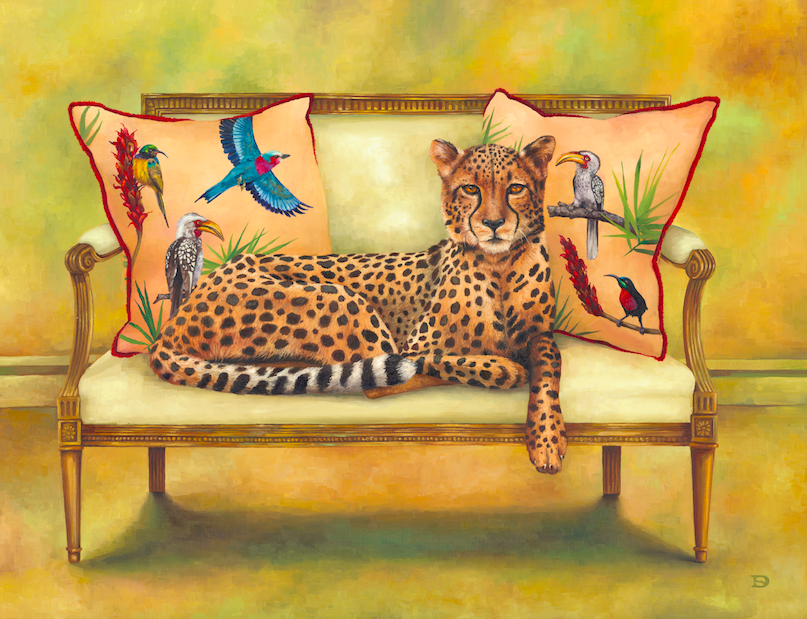 It was in this beautiful part of South Africa where the inspiration to capture the African soul on canvas was born. This passion for the Dark Continent, even survived the impressions of the Masters made when she toured Europe, with her art class in 1999.

With immense concern, Deziree fights with passion to raise awareness for the Rhino’s plight and that of other endangered animals. The collection (Wildlife in Colour) was very much inspired for that same cause. Deziree states, “I originally got inspired by Kobra Street Art – I thought what magnificent work and imagine that look for our African Animals! This is why I painted the originals so big. I wanted the feel of them being as big as a building!”

Each little block and line in the paintings have their own colour pallet, which was an enormous undertaking. The lines were also drawn by hand; Deziree did not use rulers or masking tape. Choosing the correct complimentary colours to sit next to each other in harmony was also a big challenge for Deziree, which she makes seem effortless in the finished pieces. The Wildlife in Colour range portrays her home country, South Africa, known as the ‘rainbow nation’ in an animal theme. Her vision was to use colours to work together and to bring the best out in each other. Some of those bright colours will shine in the dark under UV or blacklight.

Smith’s big focus is to get the world excited about African animals and hope that they will be inspired to conserve them and their habitat for future generations. Her Wild Warriors Collection is aimed at raising awareness for the wildlife orphanages, that are something rather new to the African continent, and do their best to fight poaching and raise the babies that are left parentless from a very young age.

She is currently the head designer for Whimsical Collection, a brand well known throughout the African continent and some other parts of the world. These original artworks have inspired one of her top selling collections used by the commercial brand, where prints of these images are seen in her expanding product line.