In 1940 Simon Combes was born in “Wilderness Cottage”, in Shaftesbury, England, and from that day in June, the Wilderness always attracted him. His first adventures began early when in 1946 when his parents moved onto farming Kenya’s Great Rift Valley, a magical place for a young boy. 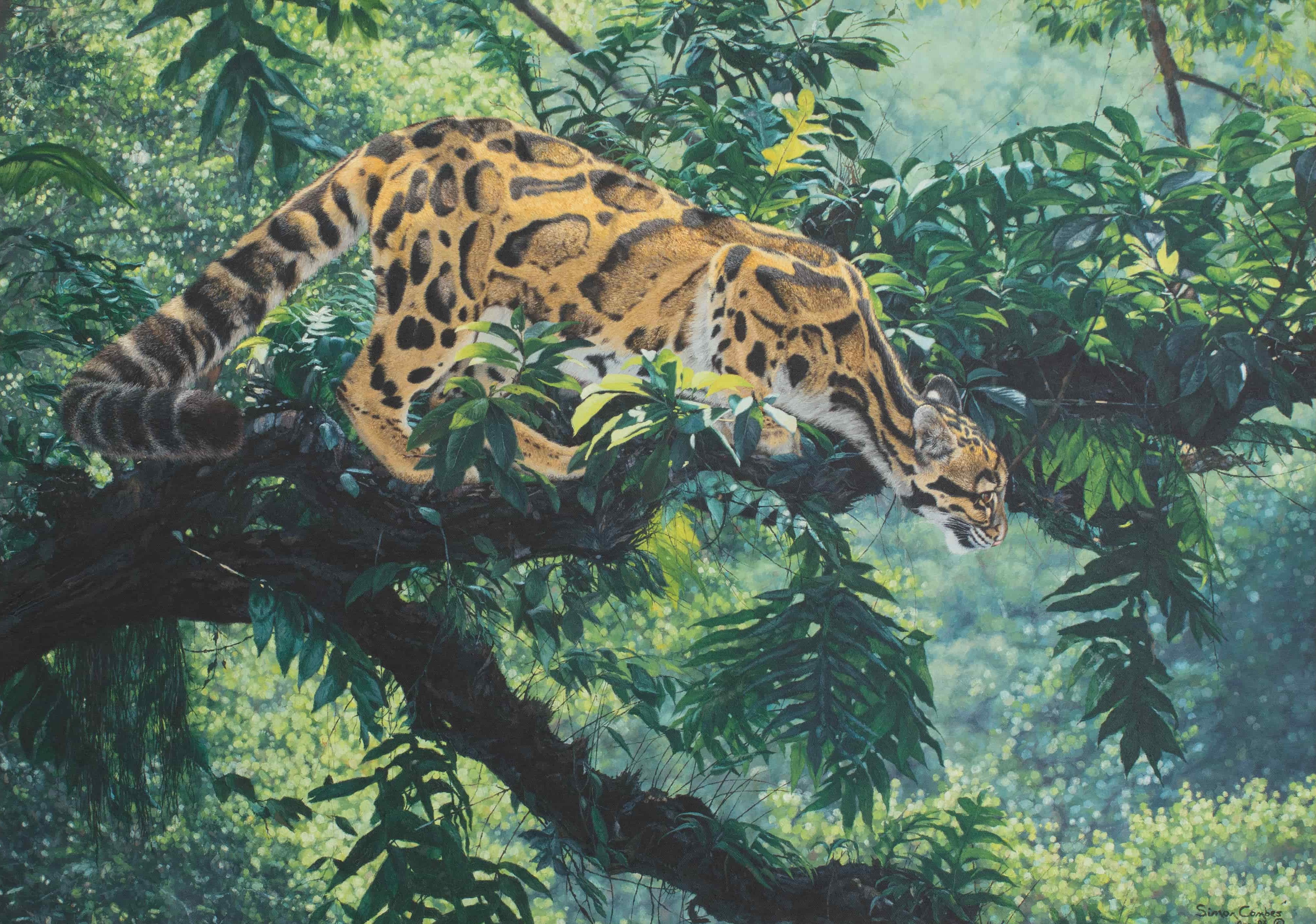 Simon loathed his years at boarding school in Nakuru and at Duke of York in Nairobi, always longing for the freedom of the bush. While managing a 2,000 acre farm when he was seventeen, he was drafted into six months compulsory military training after already applying for appointment in the Kings African Rifles. He was accepted into 4 KAR but having just finished his training was sent to Uganda where one of his duties was to teach basic etiquette and rugby to a young Idi Amin.

Sandhurst Military Academy was next and upon return to Kenya joined 3 KAR in time for Kenya’s Independence. In 1964 he was chosen to train 250 soldiers as Paratroopers. They all attended parachute school UK. Simon translated all the instruction into Kiswahili. When all the men were qualified, he became their first commander in Kenya. Immediately they were involved in the Shifta war in the northeastern province. It was during this time Simon started to draw and paint as a hobby to occupy his spare time. His subjects were the Somali and Boran people and the landscapes of the North. In 1969 he had an exhibition in Nairobi and sold all the paintings. It was then that the idea of painting full-time started. However, he was refused release from the army and was moved to army HQ as staff officer in charge of all operations and training. He was also captain of the army shooting team and vice chairman to the Kenya Rifle Association. He performed the duties of a Lieutenant Colonel. He has been called a “True Kenyan” .by his military peers. Finally, in 1974 he was released from the army and started life as a professional artist. Best known for his stunning images wildlife in the African bush, he achieved worldwide success and acclamation through many prestigious awards. His paintings hang in private and museum collections around the globe.

Simon’s life was rich with great adventures and wildlife encounters. From being lost in a blizzard while crossing the Altai Mountains in Mongolia and flying into the jungles of Venezuela to sketching Bengal Tigers atop a howdah on a swaying elephant in India his experiences and observations led him to develop his exacting artistic style, rendering his subjects with such depth and exquisite detail. Africa & Beyond: The Art and Adventures of Simon Combes, a retrospective exhibition of Simon’s major works, was held at The Wildlife Experience Museum in 2004 to celebrate his great artistic achievements.

Since 1979, The Greenwich Workshop, Inc, have published his works as Fine Art Reproductions on paper and canvas. He always said, if given the time he would rather write than paint. This talent is apparent in his books “An African Experience” and “Great Cats” also published by The Greenwich Workshop, Inc. Simon was also working on a book of Limericks about life in Kenya which reveals his ability to entertain us with his wit and humor.

Simon had a wonderful talent for communication, whether it be in speech, writing or painting. Never self assuming, be gave talks in Kiswahili to the farm staff, to school children in Russia and to many interested groups around the world.

Not only a man of the Arts, but also an avid conservationist Simon was recently appointed Kenya Representative and Project Director for Rhino Rescue Trust. He sat on the boards of several wildlife conservation organizations and raised, through his art, many thousands of dollars for their causes.

On Sunday, December 12, 2004, atop a beautiful ancient volcano near his home in Africa’s Great Rift Valley, Simon’s life was tragically taken by one of the wild animals he so lovingly portrayed in his paintings. He never “gathered moss” and now he as come home. He is survived by his wife Kat, his children, Cindy and Guy, his sister, Jenny all of Kenya and his former wife Susie of England. We shall remember Simon well.